I’ve just recently begun this dragon trophy venture, so even though I’m a highly qualified professional, I’m still learning the specific techniques of this niche art form. This is why, for a limited time, the first series of trophies will have a reduced price until I’ve done enough experiments and developments. I’m now taking commissions, so contact me while this offer lasts! If you’d rather buy my art through the protection of a 3rd party, click here to go to my Etsy shop. They do charge steep fees, which are reflected in the price.

NOTE: You will only find pictures of finished dragons here. If you’re interested in pictures of the process, go to projects. 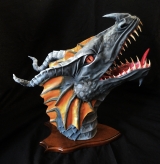 The fastest sea dragon in the world... or so she claims. Her swimming speed is only surpassed by her pride, so make sure you let her win or she'll bite your head off! 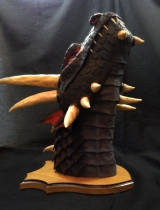 Danorethos has seen a century of war, and thus, appreciates peace and dialogue. However, when given a reason to attack, he will show no mercy. 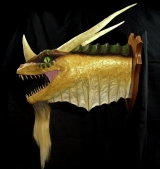 Graceful and wise, Anachromie is the Keeper of the Sands of Time. On her lies the responsibility of eliminating those who seek to disrupt time and protect the order of the Universe.

A fierce red dragon whose lust for blood and gold led him to leave home at an early age. He flew north, where he quickly became the scourge of the land. His reign lasted for a mere century, when a group of adventurers somehow managed to slay him.

This is Evakyl'usk, an old friend of mine who changed over the years... and so did his skin. He became sour and bitter, and he started to "rust". Eventually, he left to start a new life as a hermit somewhere far away.